Making your own marshmallow creme is fast and easy and doesn't come with artificial ingredients or preservatives. Use it to top your favorite dessert.

Wow, it's been awhile since I posted a recipe. I don't even know what I fill my time with these days, but I never seem to have enough of it. I have been lucky to have a baby who sleeps for several hours in the afternoon, which actually lets me get some cooking done.

However, I rarely think to photograph those meals and write about them, since I'm trying to get so much other stuff done. Oh well, such is life with an almost 3 month old, so you'll have to take what I've got for now. And right now it's Homemade Marshmallow Creme.

I will admit that I haven't made this homemade marshmallow creme very recently, but I have made it several times. It's a great treat to make when you have leftover egg whites for whatever reason.

I once bought marshmallow creme from the grocery store. Admittedly, it was whatever store brand was the cheapest, but I found it terrible. It had a horrible fake aftertaste that I couldn't stand. Then I found a recipe for homemade, and I tried it. We're talking day and night here. The homemade had no nasty off-flavors, just sweet and vanilla.

Making marshmallow creme is one of those things (like pink popcorn and homemade marshmallows) that requires a candy thermometer. Just don't even try it if you don't have one. If the temperature of the sugar syrup is off, it will most likely fail.

Other than that, this stuff is pretty easy to make. All it requires is whipping up some egg whites, pouring in the hot sugar syrup (which cooks the egg whites), then whipping up the whole mixture. Basically, your mixer does most of the work for you.

What you're left with is a thick, glossy, sweet and vanilla-y treat that's great to use as a topping for cakes or ice cream. I love to put a dab of it on a graham wafer along with a small chocolate to make indoor smores. Yum! This is also what I used to cover my smores ice cream cake. Or you could use it to make smores pizza. Oh the possibilities!

I hope you don't expect homemade marshmallow creme to be a healthy snack, because it is not. It is composed mainly of sugar. However, since it's got a lot of air whipped into it, it's not that high in calories. Just keep your portions reasonable and you're good! 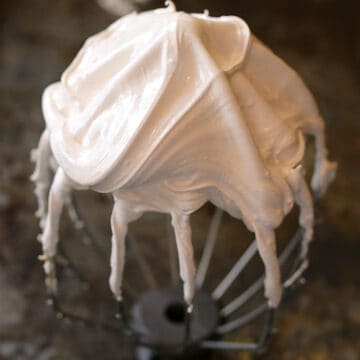