Puffed Wheat Squares are a Canadian favorite. Chewy, chocolatey, and easy to make (No-Bake), you can also add dried fruit to suit your tastes.

Well, here I am again with another quintessential Canadian treat - and it's not even Canada day or anything! This time I made Classic Puffed Wheat Squares. If you're from Canada, there's a very good chance you've had these before.

They've been a staple for my family every Christmas, but really, they're good at any time of the year. You'll often find them sold in Canadian cafeterias, gas stations, and even vending machines.

Puffed wheat squares, like Butter Tarts and Nanaimo Bars, are a sweet Canadian treat that have been a regular part of my Mom's and/or Grandma's baking repertoire for as long as I can remember.

I'm not the only one that loves the chewy chocolate treat. In fact, Puffed Wheat Squares was one of the most commonly searched recipes on Google Canada in 2015.

However, unlike Butter Tarts and Nanaimo Bars, I had no idea that they were distinctly Canadian until very recently. And bonus, they're much easier to make! This made me want to share the love with my new American friends. Try it, you'll like it - I promise!

How to make Puffed Wheat Squares:

These chocolatey treats are sticky, chewy and delicious, and almost as easy to make as good ol' rice krispie squares. I say "almost" because it does take a little more mixing and boiling of ingredients, but after that, it's all just stirring.

The recipe for Puffed Wheat Squares is vegetarian as written and can easily be made dairy-free and vegan simply by replacing unsalted butter with a dairy-free butter substitute.

Puffed wheat squares are a relatively low-calorie sweet treat. But like any desserts, they're still high in sugar, so eat them in moderation! 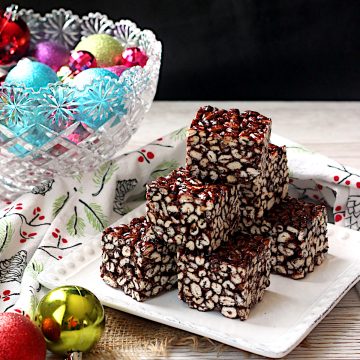 Carissa Serink
Puffed Wheat Squares are a Canadian treat that should be tried by all! Chewy and chocolatey, they're a perfect sweet treat!
Prep Time5 mins
Cook Time5 mins
Total Time10 mins
Servings: 16
Calories: 115kcal
Keep your screen on

Puffed barley or kamut can be used instead of wheat if you prefer.

64 shares
We use cookies to ensure that we give you the best experience on our website. If you continue to use this site we will assume that you are happy with it.Ok