This comforting Chicken Barley Soup is easy to make even on the busiest weeknights, thanks to supermarket rotisserie chicken.

I recently bought a little bag of barley that I didn't have plans for. I bought it on a whim, and it sat in my pantry for several weeks. That's what happens when I buy things that are NOT on my grocery list.

But after having it stare down at me from it's spot on the front of the shelf it was sitting on, I decided to add it to some soup. Of course I first thought of Beef Barley soup, which is a classic.

But I didn't have beef. And I did have some leftover frozen rotisserie chicken. So Chicken and Barley Soup it was.

How to make Chicken Barley Soup

Making your own chicken barley soup is pretty much like making chicken noodle soup, but with barley instead of noodles. The result is a soup that is higher in fiber, with a little extra chewiness to it; thanks to the whole grains.

In this case, you only need one pot to cook your soup, as you don't need to cook the barley separately - you just throw it right in with the soup.

As an added weeknight-friendly bonus, this soup uses pre-cooked chicken to make it super quick to cook. I love to use rotisserie chicken because it's an easy and affordable option, but if you have leftover chicken you've cooked yourself, feel free to use that instead.

Note that there might be some variation in cooking time for this soup, depending on what kind of barley you have.

Some barley takes longer to cook than others. Mine was "Italian Barley", and its package instructed that I cook it for 12 minutes.

Some barley takes much longer to cook, so if you want a quick cooking soup, make sure you check the package instructions when you're choosing it at the grocery store.

The sodium content of this recipe will vary depending on what type of chicken broth you use. The calculations I made used homemade broth, which is what I used to make it.

If you use store-bought broth, choose a reduced- or low-sodium version to help keep the sodium content of this recipe down. 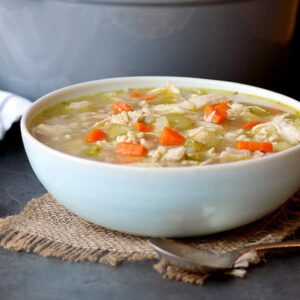 The cooking time will depend on the type of barley you used - use the cooking guidelines on the barley package to help you determine how long it needs to cook. Choose barley that cooks more quickly for a weeknight friendly, faster cooking soup.

40 shares
We use cookies to ensure that we give you the best experience on our website. If you continue to use this site we will assume that you are happy with it.Ok