With the cost of vanilla skyrocketing over the past year or two, it is no longer cost effective to make your own vanilla. The cost of buying enough vanilla beans to make one batch (about 1 cup) of vanilla hovers around $60USD. However, buying a similar amount of pure vanilla extract at Costco costs about $35-40USD. If you do find a reasonable deal on vanilla beans, go ahead and make your own - it really does taste great! If not, you might be better off buying vanilla extract for now.

Well, the Holidays have officially come and gone. While I'm sure many of you are eager to pack away the decorations and forget about all the hubbub until next December, I say now is the perfect time to get a head start on your gifts for next year. Or your Christmas baking (don't worry, you won't actually be baking anything yet). There's a reason you need to think ahead sometimes with gifts, at least if you're making them. Sometimes it takes a really, really long time to make something good. As is the case with Homemade Vanilla Extract.

Don't worry - even though you need to start making your vanilla soon in order to get it packaged up for Christmas next year, you certainly won't be working on it all year. It's very low maintenance. All you need to do is get some vanilla beans (I ordered mine from Beanilla and was very happy with both the price and quality), slice into them, stuff them into a glass bottle and fill it up with vodka. Let it hang out in your pantry for the next several months, but don't forget to give it a good shake every now and then.

This was my first time making vanilla from scratch, and I didn't really know what to expect. The instructions I was working off of (from Beanilla) said it would only take 8 weeks to turn a bottle full of vodka and vanilla beans into vanilla extract. But the 8 week period came and went and I was not confident that it was ready to use - it still smelled heavily of vodka. In fact, 8 MONTHS passed by before I decided it was ready. HOWEVER: in hindsight I think it would have been ready sooner. The only vanilla I had to compare to was some heavy duty stuff from Mexico. When I ended up buying a bottle from Costco, it smelled just like my homemade stuff. But, there is no harm in letting it sit for months - the longer, the better. Perhaps mine took longer because I wasn't shaking it as often as I should have (once or twice a week).

When you decide your vanilla is done, you could either decant it into smaller bottles to give away, or you could just keep it for yourself and use it as is. No need to remove the vanilla beans. In fact, with the beans still in there, as you use the vanilla, you can top it off with small amounts of vodka every now and then for a few months. If you notice the potency of the vanilla start to drop off, stop adding extra vodka.

If you're a baker, or you know anyone that bakes, this will definitely get used. Just make sure to start another batch well before you use your current bottle up. 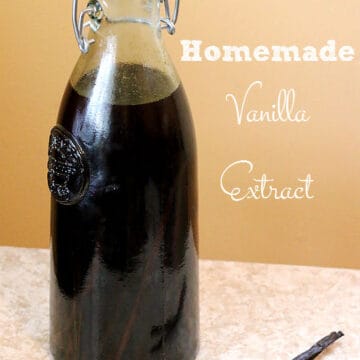 Carissa Serink
Making vanilla is easy and economical. Just keep in mind that you need to let it sit for several months to steep.
Prep Time15 mins
Total Time15 mins
Servings: 1 cup
Keep your screen on