This Smore Ice Cream Cake may not be the prettiest dessert I've ever made, but it is certainly one of the tastiest. I made it for the Tykette's 2nd Birthday, and judging from the smiles on her faces while she was eating it, she liked it too. In fact, a couple of days after her Birthday, she asked for "more ice cream pie".

I asked her for weeks before her birthday if she wanted me to make a birthday cake. The response I got was "no, ice cream". So I decided to make an ice cream cake. The idea to make a Smores cake came to me in the middle of the night when I couldn't sleep. I absolutely love  smores. Like LOVE them. In fact when I get a hankering for something sweet, I will often make myself a microwave/toaster oven smore at home. But I actually never had a smore until after I graduated from high school. Even though my family went camping every summer when I was growing up, and we roasted marshmallows on a regular basis, smores were never on the campfire menu. I think it was because they are one of the things that "just don't look appealing" to my Mom. Or maybe because of how messy they are. Anyhow, I'm making up for my lack of childhood smores now.

I made all the components of this cake, except the ice cream, from scratch. Of course, if you want to save time, you can buy the fudge and marshmallow creme. I found homemade marshmallow creme to be worlds better than storebought. I've only even bought marshmallow creme once, and I was turned off by a slightly chemical aftertaste. The homemade one I made had tasted great, with a strong vanilla flavor. I recommend making the graham crust from scratch, because you can make it in the pan of your choice and you're not stuck with a flimsy foil pie pan.

The fudge is quick and easy to make, with a short ingredient list. The result is a thick, super chocolately fudge that can be warmed up to use as an ice cream topping. Assembly of the cake takes some time because you have to freeze each layer before you add the next. Make sure you use enough ice cream (at least 2 pints or 1L for each layer) or you'll end up with a very short cake. Use whatever flavor of ice cream you want, either vanilla or chocolate based. I used a couple of different Culver's flavor of the days - one layer vanilla based and one layer chocolate based. This cake is the perfect summer special occasion cake, especially if you're having an outdoor party or barbecue. Every one of your guests, no matter their age, will love it. 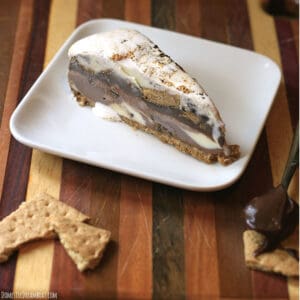 Storebought fudge and marshmallow creme can be made in lieu of making from scratch.