The flavor of pumpkin pie, but easier to make with a graham cracker crust, Pumpkin Pie Cheesecake Bars are the perfect end to your Thanksgiving dinner.

I've never been much of a pie person. There are definitely some custard-based pies that I like (Key Lime is my very favorite), but fruit pies are not for me.

I think it's because I don't like the traditional pie crust. I don't enjoy eating it, and I despise making it.

If I ever do make a pie with a traditional pastry crust, which is rare, I almost always use a store-bought crust.

So this year, I tried something a little different. I made Pumpkin Pie Cheesecake Bars. No store-bought crust is required since they use graham cracker crust (my favorite).

I based the recipe on my Pumpkin Pie recipe, which is delicious, even to my pie-disliking palate.

I also remembered a delicious pumpkin-flavored cheesecake that I made many years ago, and decided to add a cheesecake swirl. You could forgo the cheesecake swirl in this recipe completely, and it would still be great.

And, I decided to use the crust that is always my fall-back on pie and bar desserts: graham cracker crust.

These bars are make-ahead friendly, which is perfect for those holiday feasts. In fact, it's pretty much a necessity to make them ahead of time, because they take several hours to cool.

I would recommend making them at least the day before you plan to serve them, then keep them in the fridge until you're ready to serve them.

If you don't want them to be fridge cold come dessert time, just take them out of the fridge and keep them at room temperature for a few hours before dinner.

There are 3 different components to these pumpkin spice flavored bars: the pumpkin pie filling, the cheesecake swirl, and the graham cracker crust.

As we all know, pumpkin pie is better with whipped cream. These Pumpkin Pie Cheesecake bars are no exception.

Whisk together some heavy cream, sugar and vanilla, or go for the old spray can of real whipped cream.

After all, there's just something that says "Thanksgiving" in that "gsshhh" sound that it makes as you layer it over the entire top of your dessert.

The nutrition information in the recipe uses 2% evaporated milk and 1% milk for the calculations.

On portion size: cut the bars into larger portions (16 bars) if you're serving them as a stand-alone dessert.

If you're using them as part of a dessert tray or buffet, try cutting them into smaller, bite-sized portions. Aim for 32 pieces. In that case, you could halve the above nutrition information for one piece.

Whipped cream is not included in the above nutrition info. 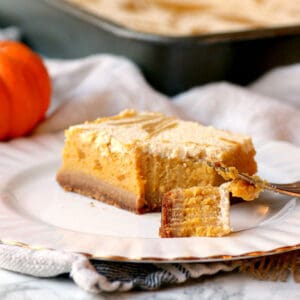