I'm always on the look-out for a meatless meal that Hubby will eat without asking "Where's the meat?". I found one. Not only did he not complain about the lack of meat, but he actually commented how good these chipotle sweet potato skins were, several times! That means winner in my house.

Eating more meatless meals - at least one per week - can have many benefits:

...which get roasted until soft.

After they've cooled for a bit, cut them in half lengthwise, then scoop out some of the flesh. You want there still to be some sweet potato left in the skins. I like leaving about 1cm (½") of flesh in the skin. Make sure you save the sweet potato flesh you scoop out to use for something else. Then you brush on some chipotle deliciousness and bake them again.

Then you stuff them with the black beans tossed with the chipotle sauce, cover the whole thing with shredded cheddar and bake again.

I like them garnished with some chopped avocado and cilantro, but they would also be great with sour cream or guacamole. Serve with a simple side salad to make a complete meal.

These skins do take a considerable time to make, which can be difficult to fit in after a long day at work. The skins can be pre-baked then held in the fridge to finish later.

The original recipe called for shredded chicken instead of the black beans, and my family loved the recipe that way too. But considering the benefits of meatless meals, why WOULDN'T you want to try more? Start with this one, you won't regret it! 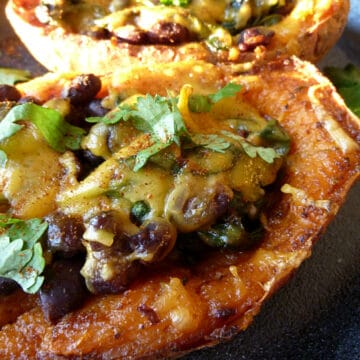 Serve with a salad to make a complete meal.
Make ahead: Complete recipe through step 3. Then put the skins in the fridge until ready to use.