A spin on a traditional Brandy Old Fashioned but the the slightly spicy addition of candied ginger and ginger ale. Perfect for fall and the Holidays!

Before moving to Wisconsin, I had never tried a Brandy Old Fashioned. Sure I had heard of them, but I assumed that they were, as their name suggests, old fashioned and that no one really drank them anymore. However, I was wrong. Here in Wisconsin at least, the Old Fashioned is still, very much in fashion. I have had many since moving here. Some good, some mediocre at best.

I won’t pretend that I have become an Old Fashioned expert or connoisseur, but I have come up with a version of one that I, at least, find quite appealing. Today I bring you the Ginger Brandy Old Fashioned.

What’s in an Old Fashioned?

An Old Fashioned can be made with Brandy or Whiskey (but most often with Brandy here in Wisconsin), some muddled citrus, maraschino cherries, sugar, bitters and may or may not be topped off with club soda or lemon lime soda. I’ve been trying different variations of the recipe at home, making substitutions as needed when I run out of ingredients.

I never have lemon lime soda, and I don’t like it anyway, so I don’t use that. I’ve tried versions with different flavors (including plain) club soda. But I almost always have ginger ale, and I really like it in cocktails. I tried it in an Old Fashioned and liked it, and decided to add even more ginger. In place of sugar, I used a slice of candied ginger. Yum, this is definitely the Old Fashioned for me!

What I do find with Old Fashioneds, is that their appearance can very quite drastically. Some versions don’t use muddled fruit which results in a clearer, cleaner looking drink. Mine is a bit pulpy looking, since I muddled the orange, cherry and ginger pretty aggressively and only used the top of the cocktail shaker to strain it. However, I like the flavor that muddling the fruit provides, and the appearance is less important to me.

The cherries you use can also greatly affect the color of your drink. Over the past few months, I’ve gone through 3 different jars of maraschino cherries. One was a regular jar that I bought in the ice cream section. It was dyed a scary looking bright red that stained everything they touched. These resulted in a more red colored drink (as seen in these pictures). The other 2 jars were naturally colored – one store bought jar that was colored with vegetable dye (I’m guessing beets) and the other was a homemade jar that was the same color as fresh cherries. Both of these jars changed the color of the drink much less.

All said and done, I’ve seen so many different recipes for Old Fashioneds, that I don’t really think there is a “right” way to  make them. This is my version, and I like it. Give it a try, and see how you like it.

A spin on a traditional Brandy Old Fashioned but the the slightly spicy addition of candied ginger and ginger ale. Perfect for fall and the Holidays!
Prep Time10 mins
Servings: 1
Calories: 270kcal
Keep your screen on

The above nutrition information assumes that you will eat the orange slice, maraschino cherry  and candied ginger garnishes (who doesn’t??) If you’re looking to cut back on calories and sugar, you could use diet ginger ale. Look for a brand that is sweetened with safe sweeteners like Stevia, and don’t contain aspartame or sucralose. 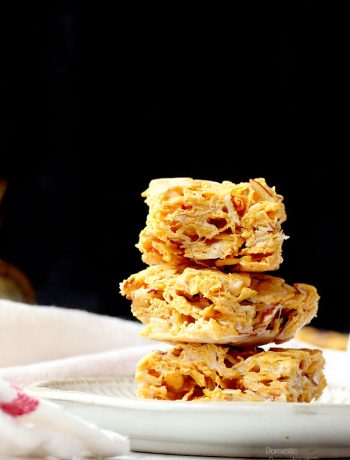 Top
104shares
We use cookies to ensure that we give you the best experience on our website. If you continue to use this site we will assume that you are happy with it.Got It!