If you hadn't already noticed, Christmas is officially upon us. My baking is finally done, grocery shopping for the big day is done and I am slowly starting to get things ready for Christmas Eve and Christmas Day meals. I am cooking for 5 this year, which - I know - is much less than some people cook for at the Holidays. But it is also much more for me than last year when we spent Christmas alone.

Traditionally, my family eats Ukrainian food on Christmas Eve and a standard "holiday" meal of turkey or ham, stuffing and sides on Christmas day. Since I'm one that likes to stick to tradition, I'm following that same plan. I absolutely do NOT want to be spending my Christmas in the kitchen all day, so I'm preparing as many dishes ahead of time as possible. This Slow Cooker Gingerbread Pudding Cake is one of those type of dishes. You can get it all mixed up, and toss it into the slow cooker ahead of time. It can even stay in there for a little while after it's done cooking to keep warm. And, as an added bonus, this spicy, molasses-y dessert is exceptionally tasty!

I have made this cake many times, both in the slow cooker and in the regular oven. It turns out great both ways, so it depends on your schedule and oven requirements which way you do it. Slow cooker takes longer, but it's hands off and frees up the oven.

When you take a look at the ingredient list for this cake, don't be daunted by the seemingly long list of ingredients - they're mostly spices, as well as a couple of duplicates like water and butter. This cake really is easy to whip up. You mix the dry ingredients together, then cream butter and sugar together and add egg. Mix in the flour mixture and water-molasses mixture to form a batter, which gets transferred to your baking dish or slow cooker.

Then the batter is sprinkled with brown sugar. DON'T forget this step! I did once. The results - though semi edible - were not good, despite all the raves from the people I was feeding it too. This is a dessert and it does need sugar.

Now for what makes the "pudding" part of the Pudding Cake. You douse the whole thing in a water-butter mixture. Don't worry, it's supposed to look like that. The water will form a pudding-like sauce in the bottom of the pan, that is basically the cake's own sauce.

This pudding cake is absolutely best served warm. And although it is definitely good enough on it's own, it's even better served with a lightly sweetened whipped cream or your favorite vanilla ice cream. Merry Christmas!

The nutrition information in the recipe below does not include any whipped cream or ice cream.

To make this recipe dairy-free, replace the butter in the recipe with your favorite dairy-free butter substitute. 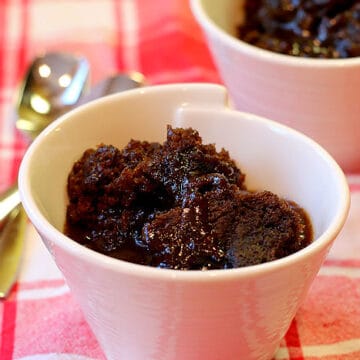 Gingerbread pudding cake is a spice filled cake with it's own sauce that is great for a big dinner. Just start up the slow cooker a few hours before you need it.
Prep Time15 mins
Cook Time2 hrs
Total Time2 hrs 15 mins
Servings: 8
Calories: 345kcal
Keep your screen on

If using fresh ginger, add it with the egg at the end of step 2. Slow Cooker Instructions: Instead of cooking in the oven, this pudding cake can be cooked in a slow cooker. To do this, grease your slow cooker crock and follow the recipe as written. Cook on high for 1.5 - 2 hours and turn off the slow cooker when the top appears dry and cracked.