This Spiced Meat Pie with Phyllo Crust is an impressive main course. Ground meat with raisins, pistachios, and spices wrapped in crisp phyllo.

Today I bring you a recipe that is impressive and delicious. I wouldn't really call it a weeknight meal, as the time it takes to prepare and assemble it is lengthy. However, it would be a great entree to serve at any dinner party or weekend family dinner.

The recipe I'm referring to is Spiced Meat Pie with Phyllo Crust. This mouthwatering pie consists of ground meat, warm spices like turmeric and cinnamon, raisins, pistachios, and vegetables. I have tried it with ground lamb and ground turkey, and both turned out great. You could also use lean ground beef.

The crust is several layers of crisp phyllo. Working with the phyllo can be a little frustrating, but don't worry if it doesn't turn out perfectly - it's very forgiving.

How to make Spiced Meat Pie with Phyllo Crust:

As I've mentioned, this meat pie does take a fair bit of time to make (approximately 2 hours, all said and done), so it is best tackled on a day when you're not too busy.

The filling is not difficult to make. It involves sauteeing onions and carrots together, then adding the spices and garlic, then the meat, and cooking until browned. Finally, the raisins, pistachios, and cilantro are stirred in.

The other component of the filling is a yogurt-egg mixture, which is simply whisked together with a little salt to season it. This is simply poured over the meat mixture.

Making the crust does take a little time, and working with phyllo can be frustrating if you've never done it before.

Tips for working with Phyllo:

Phyllo (or filo as it's sometimes called) dough is a very thin, unleavened pastry that's often used in Middle Eastern and Balkan cooking. It can be used to make both sweet and savory dishes.

It's typically stacked, with olive oil, butter, or other fat brushed or spread between the layers.

Although phyllo can be made from scratch, it's easiest to buy it pre-made. You will find it in the freezer section of your grocery store, near things like frozen pie crusts, puff pastry, and bread dough.

Because it's so thin, phyllo is very fragile and can dry out and tear easily when working with it. To help avoid this, make sure you keep any phyllo that you're not currently using covered with plastic or a clean, damp towel. However, make sure it doesn't get too wet, or the layers can stick together.

You want to be very gentle when handling phyllo. Use a soft-bristled brush, like a silicone pastry brush, and a light touch when brushing with olive oil. Alternatively, use an oil sprayer, which will probably do the job more quickly and easily, but you might have to clean up overspray.

The nutrition information in the recipe below uses a total of 5 Tablespoons of olive oil for the calculations, which is approximately how much I used when I made this recipe. If you use significantly more or less oil to brush or spray your phyllo sheets, the actual fat and calorie contents of your pie will differ.

To make this recipe dairy-free, replace the yogurt with dairy-free yogurt.

Serve your Spiced Meat Pie with Phyllo Crust with a green salad to make a complete meal. 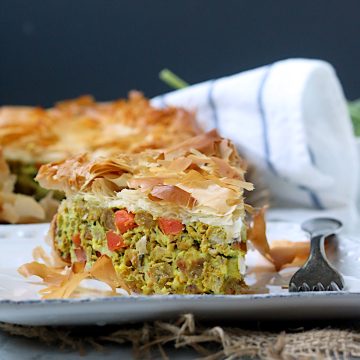 7 shares
We use cookies to ensure that we give you the best experience on our website. If you continue to use this site we will assume that you are happy with it.Ok