This Lighter Cream of Fresh Tomato Soup is made with fresh tomatoes, and it's a perfect way to use up garden tomatoes.

Can you believe summer is coming to an end? I can't, or at least I refuse to believe it. What makes it even harder to believe is the fact that this weekend has been the hottest our little corner of Wisconsin has seen all summer.

With late summer (and ahem...fall) comes a bounty of garden vegetables. My zucchini seem to be (sort of) tapering off the past week or so, but my tomatoes are turning red like crazy! I've got 4 or 5 different varieties. Some big, some small, some orangey, some pinkish, all delicious.

I've got a couple of favorite uses for tomatoes, neither of which really require much of a recipe. One is a simple Caprese salad. Tomatoes, basil, fresh mozzarella, olive oil, salt, and pepper. And can't forget a nice thick piece of crusty bread to sop up all the juices.

My all-time favorite is a bacon and tomato sandwich, a BLT sans lettuce if you will. I love it on nice soft, fresh whole wheat bread. Yum!

A few years ago, I never would have even considered making cream of tomato soup from scratch. It just came out of a can. Maybe, if you were getting fancy, it might have rice in it.

But then I had a major soup cooking phase. I learned how to cook all kinds of soups from scratch, and they all came out tasting much better than the canned stuff. And much healthier too.

But this is the first time I've ever made Cream of Tomato soup with fresh tomatoes. I needed a recipe to use up the 5 pounds of tomatoes sitting around on my counter, plus all of the ones that are still out on the vine!

The ingredients to make tomato soup are fewer than I would expect: carrots, onion, garlic, tomatoes, olive oil, basil, salt, and pepper. Even the cream (well not really cream, more on that later) is optional.

But there is quite a bit of chopping involved, and tomatoes aren't exactly the easiest to chop, so the prep takes a while. The soup also has to simmer for 30-40 minutes, so make sure you have lots of time on your hands when you plan on making it.

When the soup is done cooking, you will puree it and, if you want, strain it. I did try the soup without straining, and, while it is still obviously edible, it was a bit seedy for my taste.

I was torn deciding whether to strain or not. On one hand, I like my soup on the chunky side. On the other hand, I'm just really not a huge fan of tomato seeds. Straining it ended up being the way to go.

The seeds and skins make for an unenjoyable soup, and it's definitely best to strain the majority of them out.

Now's where the "cream" in the cream of tomato soup comes from. Or at least in my lighter version. Evaporated milk. You know, the stuff that comes from a can. I use it for all my cream-based soups instead of heavy cream or half and half to drastically cut the fat and calories. You won't even notice a difference! Plus, it's pretty easy to keep a can of evaporated milk in the pantry in case of a last-minute creamy soup craving.

Now, one more funny story. It's a good one, I promise. The other night when we ate this soup, my 2-year-old refused to try it. In fact, she pretty routinely refuses to try any vegetables. Who would have thought...a dietitian's daughter not eating veggies!

While refusing to taste the soup, she repeatedly asked for a popsicle. Since I have a Zoku instant popsicle maker, I said "wouldn't it be funny if I made her soup into a popsicle and gave her that?" of course, hubby thought it was a great idea, and the Peanut thought a tomato soup popsicle sounded a lot better than soup in a bowl.

In about 10 minutes, she was eating frozen tomato soup. She had mixed responses. At first, it was "not good", but then she warmed up to it and said "pretty good".  In the end, she only ate half of it, and she hasn't asked for another popsicle since. But at least she tasted it!

Make sure to use vegetable broth for a vegetarian soup. Note that the fiber content will be less than what is shown in the Nutrition Information in the recipe below after straining.

Note that this soup is quite low in calories and protein. Serve it with a sandwich (grilled cheese is perfect) to make a complete meal.

To reduce the sodium content of this soup, use low-sodium vegetable or chicken broth. Note that this is also a great recipe to try MSG-salt. 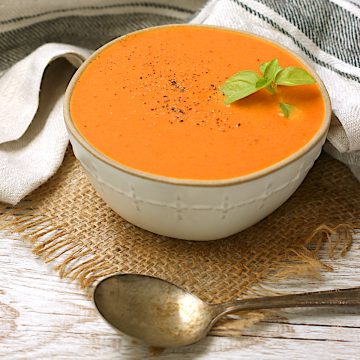 Carissa Serink
This cream of tomato soup is made from fresh garden tomatoes, and has less fat thanks to the use of evaporated milk.
Prep Time30 mins
Cook Time1 hr
Total Time1 hr 30 mins
Servings: 6
Calories: 130kcal
Keep your screen on

Straining is optional, but without straining, the soup is very seedy with pieces of tomato skin.