Beet Borscht is a Ukrainian soup made with beets, vegetables, and dill. It's a healthy soup that's gluten free and can easily be made vegan.

I've been eating borscht pretty much as long as I can remember. My Grandma used to make it when I was a kid, though at that time, I didn't actually like it.

Fast forward 20 years, and I started making it for myself, because, you know, tastes change. I've been making it now for 15 years, but the recipe was never consistent. Until now. I've FINALLY been able to replicate the flavor of my Grandma's borscht.

Borscht is a Ukrainian soup that's commonly served across much of Eastern Europe. It's often made with beets, and a variety of other vegetables. It might be made with cabbage, celery, tomatoes, carrots, peppers, and/or potatoes, and it's usually seasoned with dill.

Borscht is typically made with whatever vegetables happen to be on hand, with the recipe changing each time it's made.

Sometimes proteins such as small amounts of meats, or legumes are added. The broth might be made with meat, or bone stock.

Borscht can be served either hot, or cold, and is often served with sour cream.

How do you make borscht?

Developing and testing this recipe was difficult. I'm so used to just throwing in whatever vegetables I happen to have in the fridge, and I don't usually follow a written recipe.

But this time, the recipe came out so much like my Grandma's borscht, I figured I must have gotten it right, and decided to share it.

Making borscht is not difficult, but it does require a lot of vegetable chopping, so you'll want to make sure you have a good knife.

Alternatively, you can use a box grater to shred the beets, which will give the soup a different texture.

I calculated the nutrition facts in the recipe using regular (not low sodium) chicken broth. It does not include sour cream.

To make a complete meal, serve with a meat entree or a salad that contains meat or legumes. 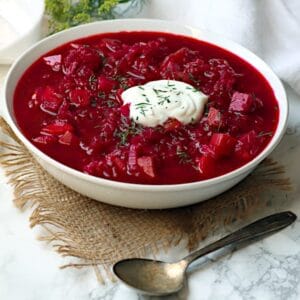 Carissa Serink
Beet Borscht is a Ukrainian soup made with beets, vegetables, and dill. It's a healthy soup that's gluten free and can easily be made vegan.
Prep Time20 mins
Cook Time30 mins
Servings: 8
Calories: 155kcal
Keep your screen on

193 shares
We use cookies to ensure that we give you the best experience on our website. If you continue to use this site we will assume that you are happy with it.Ok