These roasted marshmallow Rice Krispie squares are made with browned butter. The result is a square that tastes much richer than the traditional favorite.

We've already discussed how browned butter makes anything better. And who doesn't like roasted marshmallows? Seriously, I don't think I've met anyone that doesn't. It's one of those things that brings us back to our childhood, sitting around the campfire with not a care in the world.

When I first saw this recipe, I knew it was genius. Simply preparing the same ingredients to something so familiar in a slightly different way could make a treat we all know and love so much better. I made them immediately and loved them. Yes, it's true, browning the butter takes a little more time than simply melting it. But trust me, it's worth it. The ingredients are the same as for traditional Rice Krispie squares - marshmallows, butter, Rice Krispies (aka puffed rice cereal) and vanilla. I used the Rice Krispies made with brown rice (the gluten free ones) and they turned out great. What makes this recipe different is what you do with the ingredients.

Instead of just melting the butter, you brown it. It adds a rich, toasted flavor that is just so, so good. After it's done, pour it into a bowl that is large enough to mix all the ingredients in. Add the vanilla to the butter - it won't really mix, but that's okay.

Now the other curveball that makes these square so much better - instead of just melting the marshmallows, roast them under the broiler. Put the oven rack to the very top, line a baking sheet with parchment and put the marshmallows on the sheet. Roast them under the broiler. Don't even think about multitasking and starting to do something else, because these roast very quickly and if they get burnt, there is no saving them.

When the marshmallows are done, add them to the bowl with the butter and vanilla and mix them together. When it is fairly uniform, add the Rice Krispies and keep mixing. You'll need to work quite quickly, because the marshmallows start setting up faster than if they were just melted in the microwave. Then, just like regular Rice Krispie squares, press into a greased baking pan. I used 9x9" and the squares were quite tall. If you want flatter ones, use a 9x13" pan.

These still taste like Rice Krispie squares, but a little more special. Throughout the squares, you can see little flecks of the dark brown parts of the marshmallows that became caramelized when roasting. Try them and you'll never go back to making them the regular  way. 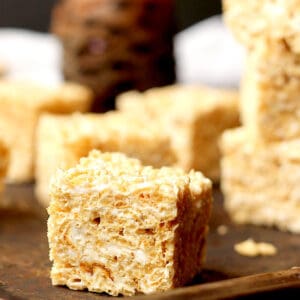 Note that the portion size for these squares is quite small - 1/12 of a recipe. The nice thing about these squares is that while they taste so much richer than regular rice krispie squares, the ingredient list is actually identical, so they are no less healthy (or no more healthy for that matter) than the regular version. Keep in mind that regular Rice Krispie brand puffed rice cereal is not gluten free, but the brown rice version is gluten free.

21 shares
We use cookies to ensure that we give you the best experience on our website. If you continue to use this site we will assume that you are happy with it.Ok